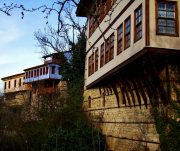 The 1790s were in Karaferye not a time of revolutionary changes, but, when examined as part of a long continuum, they contributed to breeding phenomena that were later to fully develop and dominate the early part of the nineteenth century (to name but a few: rise of nationalism, revolts and revolutions for national liberation, state reforms, issues of orientation and identity)