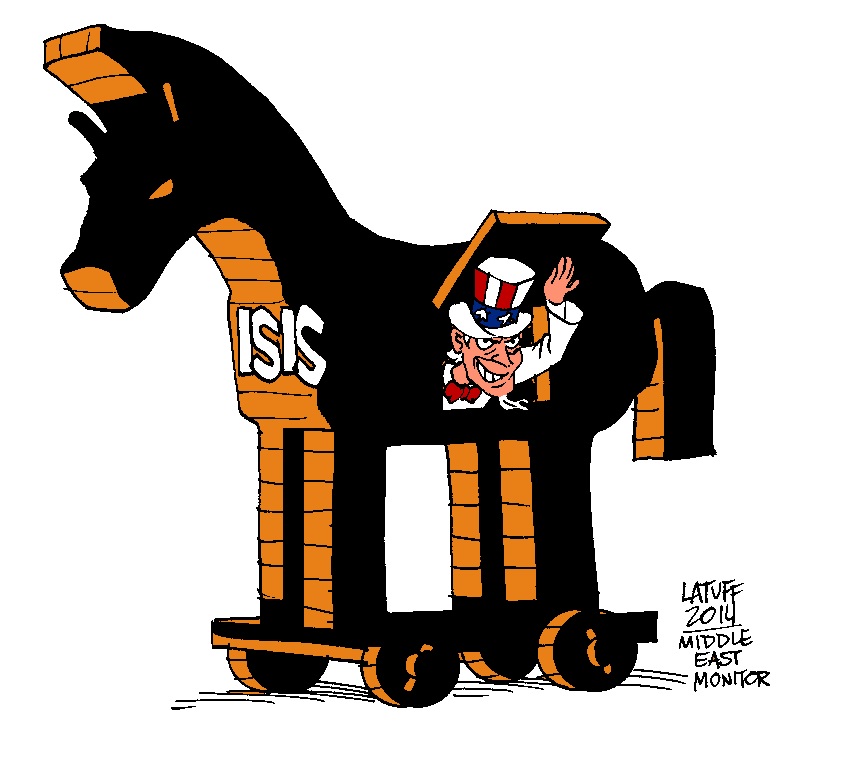 By all accounts, wherever the Islamic State has gained and held territory, its residents suffer terrible oppression and deprivation. Unless you are on their wavelength, you most likely agree that ISIS rule has been calamitous for its subjects.

Both Obama and Trump have pointed out their badass nature on numerous occasions, not so much in sympathy for those they oppress but to raise fear levels of ISIS-inspired badassery here at home. And yet, both regimes have actively, secretly, and materially supported the advance of ISIS in Syria and Iraq, fully aware of who they were and what they were up to. Say what?

Still from a CBS rebroadcast of a BBC video on ISIS exodus from Raqqa Nov. 201

According to a RAND study based on satellite imagery in Syria and Iraq, urban infrastructure, agriculture, electricity suffered greatly under ISIS and some towns were depopulated virtually entirely: “It’s been almost three years since ISIS fighters swept into the city [Ramadi, Iraq] in the blur of a sandstorm, and two years since Iraqi forces swept them back out. RAND’s satellite data showed destruction in almost every neighborhood in the city; every bridge was demolished. The city was once home to nearly 300,000 people; RAND’s data suggest no more than 36,000 still lived there after ISIS.”

The RAND document didn’t mention that all this pain and suffering might not have transpired but for US policies conducive to and even aimed at helping ISIS expand its savage dominion. But then why would it, given that the think tank often thinks and speaks for elements of the national security state?

According to an article published in the journal Studies in Conflict and Terrorism by Prof. Daniel Byman of Georgetown University’s Security Studies Program, summarized by Insurge Intelligence,

“Some of the most important foreign fighter movements in the world today receive massive and explicit state support, while still others rely on states to tolerate their fund-raising, transit, recruitment, and other core activities.”

Byman goes on to implicate Saudi Arabia, Gulf States, Pakistan, and Turkey as enablers of foreign fighters in Syria and Iraq, passing the buck to US allies—not surprising given that Byman formerly headed up the Center for Middle East Studies at the RAND Corporation  and was a staff researcher for the 9/11 Commission.

The Insurge article notes “a declassified Pentagon intelligence report from 2012 revealed not only that the US government had been aware of the policy of its allies at the time, but seemed to approve of the strategy despite anticipating that it might culminate in the appearance of an IS-type entity.”

Could it be the US approved of its regional “allies” support of jihad because our leaders deemed it to be in the national interest? If you find the logic of this puzzling, troubling, or simply unbelievable, you’re not alone. There’s no way that American corporate news media, obedient servants to the deep state that they are, would have blown this whistle or explained what the US wants or how it gets it. Exposing US complicity in enabling ISIS would simply contradict  the official war-on-terror narrative too profoundly.

Throughout living memory, US covert operations have retained religious and nationalist extremists and compliant local chieftains to send wind-up toys to topple unfriendly “regimes” in the region (i.e., governments that don’t want US military bases on their soil), and have worked with Saudi Arabia, Gulf States, Turkey and Israel to carry out off-the-books operations to provision them. The result has been to buy some time for the empire and its partners in crimes against humanity at tragic and unaccounted costs to the nations and communities affected.

The BBC (11/13/17) exposé describing how the US-led coalition of Kurdish and Arab partisans provided ISIS fighters, their families, and their weapons safe conduct out of besieged Raqqa caught the US Military flat-footed as it scrambled to construct a narrative for this untoward act of hospitality. After months of savage fighting and bombardment, a brokered truce, followed by a nervous convey of hired lorries to the Syria-Iraq border, courtesy of Uncle Sam. Newsweek (11/14/17) and other news outlets picked up the story (see BBC video, courtesy of CBS News), along with some dissembling (amplified by this Voice of America dispatch) from the US Command:

“We didn’t want anyone to leave,” Colonel Ryan Dillon, spokesman for Operation Inherent Resolve, the Western coalition against ISIS, told the BBC.

“But this goes to the heart of our strategy, ‘by, with and through’ local leaders on the ground. It comes down to Syrians— they are the ones fighting and dying, they get to make the decisions regarding operations,” he added.

Around 250 ISIS militants departed, with 3,500 of their family members leaving with them. An official described as a “Western officer” was present but did not take part in the discussions for the deal.

Canada’s Centre for Research on Globalization (11/27/17) notes that the Raqqa exodus eerily resonates with one Donald Rumsfeld arranged for Taliban fighters from Kunduz, Afghanistan in 2001:

In late November 2001, according to Seymour M. Hersh, the Northern Alliance supported by US bombing raids took control of the hill town of Kunduz in Northern Afghanistan: “[Eight thousand or more men] had been trapped inside the city in the last days of the siege, roughly half of whom were Pakistanis.  Afghans, Uzbeks, Chechens, and various Arab mercenaries accounted for the rest.” (Seymour M. Hersh, The Getaway, The New Yorker, 28 January 2002.)

And the Raqqa evacuees’ final destination? Just recently, the Islam Times (2/7/18) reported, the US is at it again in Southwest Asia and the Middle East by relocating defeated ISIS fighters to Afghanistan. That tidbit came from Maj. Gen. Mohammad Bagheri, Chief of Staff of the Iranian Armed Forces via Tasnin News Agency.

His statement followed a commemorative meeting with supreme leader Ayatollah Sayyed Ali Khamenei, who told military leaders “Today, the most oppressive and cruel system among the world is the US government. You’ve witnessed the brutality of ISIS. The US is worse than ISIS. The US government is the system that created ISIS and the like. It facilitated their attacks and initiated these crimes… The same hands that created ISIS as a tool to oppress people in Syria and Iraq and carry out crimes against them are today seeking to transfer ISIS to Afghanistan after its defeats there.”

The same article quoted Russian special presidential envoy Zamir Kabulov, who asserted “We have been carefully monitoring the genesis of the Afghan wing of ISIS over the past three years…The ISIS has nearly 7,000 active fighters, without taking into account several thousands of reservists,” also noting that the Taliban has 600,00 to 700,000 cadres in Afghanistan.

The story was echoed in several other Middle Eastern news outlets, but not by Western news media, which focused on US air bombardments on ISIS forces in Northern Afghanistan. The bad guys in that region are generally presumed to be mobilizing to overrun central Asian countries like Uzbekistan. In southern Afghanistan, the US may be attempting to direct IS fighters to attack Iran, which their Kurdish cadres have been doing for some time from strongholds along the Iran’s rugged Northwest border with Iraq.

All this could simply be Iranian and Russian propaganda. It surely is, but that doesn’t mean it’s fake news. In the absence of journalistic boots on the ground, eyewitness reports, leaked secret memos, or relevant aerial imagery we have no way of telling.

Given America’s ongoing vendetta against the Islamic Republic, there is every reason to suspect the US military enables such incursions. Those 7,000 IS cadres, how have they managed to reach Afghanistan? The ones exiting from Syria and Iraq would have to discreetly cross close to 1,000 miles of Iranian territory or be ferried by air. Which vector seems more likely? Do their families go with them? Who’s providing transportation and hospitality? Do they chow down American Military MREs? Do they get to keep their cell phones? How can we tell? Does the CIA have an answer line?

So is the US is caging up IS with Taliban hoping they’ll eat each other up? Or, is it, perchance, urging them to form an alliance and that will be nudged toward Iran? Don’t count that out. It would be par for the stupid course of events the US has unleashed in the region.

Nafeez Ahmed How the West Created the Islamic State, CounterPunch, 9/12/14.

Garikai Chengu, How the US Helped Create Al Qaeda and ISIS, CounterPunch, 9/19/14.

RAND Corporation, What Life Under ISIS Looked Like from Space, Medium, 1/9/18.

Geoff Dutton is an ex-geek turned writer and editor. He hails from Boston and writes about whatever distortions of reality strike his fancy. Currently, he’s pedaling a novel chronicling the lives and times of members of a cell of terrorists in Europe, completing a collection of essays on high technology delusions, and can be found barking at progressivepilgrim.review.