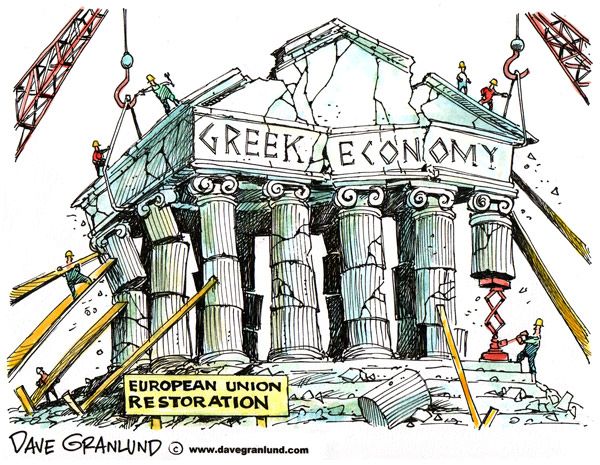 The economic crisis in Greece which threatens to act as a locomotive power that will force most of the countries in the european south to exit the Eurozone, has triggered many discussions and predictions concerning the future of Europe as an entity.

Numerous analyses find their way to the media on a daily basis, all attempting to explain the repercussions of Greeceʼs inability to reform and lead itself to an economic growth that will eventually free the country from the constantly increasing need of borrowing money to satisfy its basic needs.

However, all those reports and economic analyses have something in common. They fail to deeply examine the socio-cultural roots of the greek crisis. If one does not take into account the idiosyncrasy and the psycho-synthesis of the modern greek people, will just miss the point.

Modern Greece is by no means related either genetically or culturally to the ancient cosmos and the people who once occupied this land. The modern greeks are just an intermixture of balkan tribes (albanians/arvanites, slavs, wlachs) which in the process of time mingled with northern africans, armenians and other tribes of Anatolia, not to mention the francs and the venetians who were also dominantly present in this land.

Those groups were mainly involved in agriculture and animal breeding. A significant number of them had been employed by the ottomans to serve in the army because the local inhabitants were hard natured and warlike.

During the byzantium era, those tribes were christianized while the few remaining descendants of the ancient greeks who refused to convert to christianity were either persecuted and killed by the christian emperors or died of several plague waves that occurred quite frequently back in those days. Another factor that contributed to the reduction of the population was piracy. It is a well known fact that the city of Sparta had been almost abandoned and unoccupied for 400 years while Athens and especially the area around the Acropolis was a place for pasturing sheep.

The attempts to “hellenize” those intermixed tribes were mainly made by european sovereign states which needed a protectorate to promote their interests. The geographic location of Greece is still considered as the connecting doorway between East and West. The european romantics who dreamed of reviving the ancient hellenic cosmos through the mountain savages also bear a degree of responsibility for the false identity that was given to the modern greeks.

The superfluous and simultaneously disastrous decision to name as “hellenes” (greeks) that intermixture of tribes eventually placed a very heavy burden upon them simply because they lacked the proper educational background that would enable them to develop the necessary awareness that would help them identify themselves with the ancient inhabitants of this land. 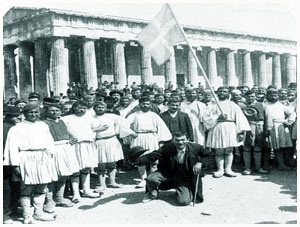 These mountainous hard natured shepherds were made to believe that they were not only the offsprings of the ancient greeks but also the christian God’s blessed people. Everyone can observe that there is no comparison between these people and the ancient greeks. No resemblance whatsoever physically, aesthetically and mentally.

The Eastern Church was forcefully against any kind of education as it wanted its subservient believers not to read anything but the Bible. The role that the Church played during the years of the ottoman presence was catastrophic for the majority of the people because it was the main and the most effective collaborator of the sultan either through collecting taxes or contributing to the suppression of every revolt against the ottoman authority. The Church was surely rewarded by the Divan with a humongous amount of land enough to rank it as the biggest landowner of the country.

The confusing identity of being a hellene and a christian at the same time still haunts most of the people in this land. Most of the people in Greece have been made to believe that they are the pure descendants of Pericles, Socrates, Leonidas and Alexander the Great while they consider it quite natural to be christian orthodox as well. Two completely conflicting worlds co-exist abnormally in the socio-cultural background of modern greeks.

The revolution of 1821 against the ottomans that eventually led to the formation of the modern greek state couldnʼt have been achieved without the contribution of the european superpowers of that era. The seabattle of Navarino that marked the creation of modern Greece reflects the need of the europeans to use this land as their protectorate governed by regimes that were either appointed or imposed by the european financial interests. Modern Greece has always been victimized and exploited by the superpowers while its role in the sociopolitical arena has never been autonomous.

The modern greek citizens who had never experienced the gifts of Renaissance, Enlightment and Industrialization remain culturally underdeveloped even today. Greece has been governed by the offsprings of the family clans that ruled the land right after the collapse of the byzantine empire and although it is true that democracy was born in this part of the world, it is not true that the ancestors of modern greeks are the ones who first created it. 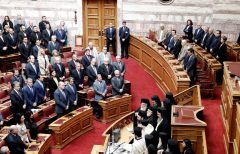 The Church continues to dominate the politics in this land. Greece is the last theocratic state in Europe. If someone wishes to have a career in politics, he had better „bow“ to the local Church bosses first.

In the 50ʼs and 60ʼs thousands of modern greeks were forced to abandon their villages and either migrate abroad or seek employment in the big city centers where factories were built and needed cheap labor. The countryside was abandoned and the cities experienced an unprecedented overpopulation that led to severe demographic and environmental problems since there was no urban planning (there isnʼt one even today).

The rural depopulation, however, created another great problem that few politicians have dared to tackle: The disease of urbanism. The constant flow of villagers showed that the motives to abandon their villages were not only based on their need for employment but also on their desire to experience the “urban style” of living with a sense of hedonistic lust. Contrary to the US southerners who take pride in their heritage and their land, the greek villagers preferred to come to big city centers and work as industrial workers or clerks instead of remaining in their land and cultivating it. They believed that “easy living” can only be found in the big cities.

The military junta in 1967 encouraged the “love for urbanism” of the villagers even more.

Two main political parties emerged after the fall of the military junta. The “New Democracy” party and the “Panhellenic Socialist Party” also known as “PASOK”. The first one had a conservative approach and the second one a supposedly socialist one. Both of them, however, had one thing in common: They made sure that everything should be directly or indirectly controlled by the state. In order to achieve their goal which was no other than to remain in power as long as possible, they found a destructive way of doing that. Thus, the state was transformed into an enormous employment agency.

Those two political parties hired thousands of unqualified individuals to work in the public sector. The regimes borrowed money from the European Union to finance the fat salaries and the special privileges of their public servant armies. Prosperity in the private sector came only if it interweaved with the public one. No matter what somebody did, no matter what public service he wished to have, he simply couldnʼt have it unless he bribed. Bureaucracy and corruption have always been interwoven.

The degree of corruption in modern Greece is by far higher than the one in many Asian, South American and African countries. The country stopped producing anything since ¼ of its workforce was employed by the state. Finding a job in the public sector became every young personʼs dream. It was no longer important what academic credentials one had. What mattered was what kind of political connections he had so as to be placed somewhere in the public sector where he would be handsomely paid without doing anything! The populist rhetoric applied by both those political parties created a new kind of roman-like ethics among the people. Undoubtedly, this grotesque political system is a unique modern greek invention. Having conservative (right wing, anti-communist) regimes with a stalinistic approach of implementing the authority of the state is something that can only be found in the country of Greece. 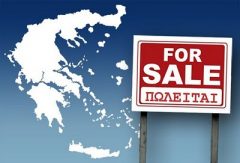 The modern greeks are noted for having mastered the art of creating conspiracy theories. The whole world is supposedly plotting against them because of their racial „superiority“.

John Maynard Keynesʼ suggestion of “first stabilize and then reform” cannot find any application here because the greek economy can never be stabilized as it overflows with useless and counterproductive public servants.

All the above mentioned facts may sound a bit surprising to someone from another western state. Well, nothing should be surprising, nothing at all.

It is impossible for the descendants of chicken and sheep thieves, who lived on top of mountains and inside caves, rarely took a shower, kidnapped their hick wives from their parents and robbed villages, to understand how civilized nations function not to mention to feel europeans. It is also impossible for a nation that never experienced the gifts of Enlightment, Democracy and the Industrial Revolution to be able to adapt to the constantly evolving international economy.

If someone wonders why the rest European Union countries are so stiff against Greece, it is perhaps because they are ignorant of the real situation here. They lack the necessary knowledge to fully comprehend the socio-cultural roots of the modern greek state.

Greece will never be a purely european country. It canʼt be. It doesnʼt want to be.